WHEN President Cyril Ramaphosa handed him an award for his late son’s bravery, not only did the awful memory of his son’s death come flooding back to Cornelius Basson, but also the satisfaction that his son Chad’s ultimate sacrifice was not in vain. The Basson family of Lentegeur, Cape Town, has been through hell since the gang-related shooting of their son Chad. On July 28, 2018, Chad attended a 21st birthday party, where a drive-by shooting took place during the early hours of the morning. At the time, tensions between two rival gangs had risen. Witness accounts conveyed to the family said Chad had shouted to people to run for cover and shoved people inside the home to safety, after which he physically shielded a young girl from a hail of gunfire. The killing of their youngest son prompted relentless efforts by the family to find the culprits, which eventually led to the arrest of the alleged perpetrator in Gqeberha, two years after the brutal incident. “As Chad jumped on the girl, he was shot in the head. He was very slender but he kept her so enfolded that she didn't have a scrape afterwards,” Basson said. “She said she could see his eyes widen every time a bullet went into his body and she could feel the vibration of the bullets going into his body. “And then after the shots died down, they (the gangsters) drove off and she had to push Chad off from her because at that time, his lifeless body was heavy.” Three of the people Chad had shoved to safety inside the house were shot in the legs, and survived, his father said. Chad was just two weeks shy of celebrating his 20th birthday. Following the shooting, the family was deeply concerned over the wellbeing of their three other children. The eldest child was admitted to hospital for a month, and another rendered suicidal. At the scene of the crime and after Chad’s burial, a detective told the family that without any witnesses, there was likely to be no criminal case. This prompted Basson to take matters into his own hands. “Every night I couldn’t sleep, and I went on to social media. We found out what the alleged perpetrator’s name was. I went on his Facebook account every night. I wanted him to be caught before his 21st because my son didn’t have his 21st.” The suspect uploaded an image and after much searching, Basson was able to identify a bookshop featured in the background of the image, in Gqeberha. Basson informed the detective and a warrant of arrest was issued, days after the suspect’s 21st birthday, on July 4, 2020. To keep sane, Basson started writing daily conversations he had with his son, and how the incident had impacted the family and entire community. This has resulted in a book, Not All Heroes Wear Capes, which is yet to be published. A BackaBuddy crowdfunding campaign under the title, “For Chad, my son!”, has been created to raise funds to publish the book. Last week, Basson received the Order of Mendi for Bravery in Silver, posthumously awarded to Chad for saving lives during the shooting, which resulted in the loss of his own life. On the same day Basson flew to Pretoria to receive the award, the suspect appeared in court, in a case that has been running for over a year, following numerous postponements. The case has been postponed to February 9, 2022. 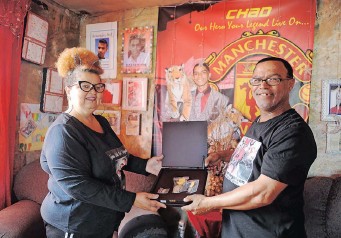